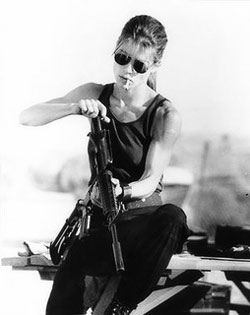 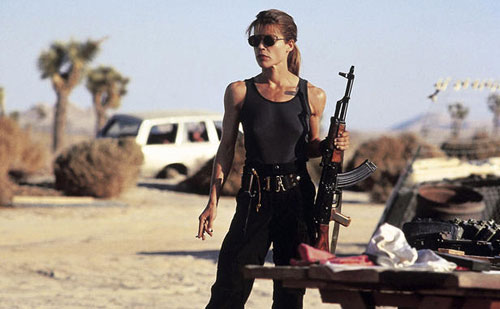 "Her Terminator 2 Workout.
Linda was working with personal trainer Anthony Cortés who also helped Edward Norton beef up for American History X. Apparently she shed 12 pounds of fat with diet and exercise. Her routine included running, biking, swimming, climbing stairs as well as free weights, mini-trampoline drills, walking lunges and abdominal work. They trained six days a week for 3 hours. The thing is she got into amazing shape after giving birth just 20 months ago.

Linda Goes Crazy with Military Style Training
It seems that in order to provide authenticity for the film, Linda hired an Israeli commando to prep her for the action scenes. She says, she did “judo and heavy duty military training.” Linda adds that she “learned to load clips, change mags, check out a room upon entry, verify kills.” She was all show – all go.
Linda Hamilton’s Feats of Strength
She could easily bench press 85 pounds for reps, run eight miles and pump load a 12-gauge shotgun with one arm. We all saw her kicking ass in the movie. Apparently it was not all movie magic, but she was tough for real. She relaxed her regimen after the movie. After shooting the movie, Linda relaxed her diet a bit and also trained less frequently – just five workouts a week. You can not go at such intensity for too long. Even Olympic level athletes relax after a major competition.
A Routine That Linda Hamilton’s Trainer Recommends
Four times a week – 4 sets of 8 to 12 reps per exercise:


When I watched the movie for the first time, I couldn’t even do one chin up. Later, I started going to the gym and found a way to train for pull-up & chin-up mastery..." (itt)
Bejegyezte: Takács Tímea dátum: 11:08