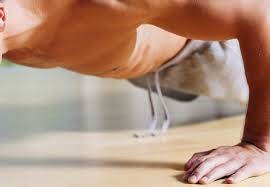 The term ‘push-up’, as with so many Freeletics exercises, stems from the simple description of the movement being performed: you push yourself up! In the starting position, the athlete lies on his chest and stomach, with  arms bent and palms flat on the floor alongside the chest. Under tension in the torso and legs, the whole body is lifted by the arms until they are completely extended. Then, in a controlled way, the body is lowered to the floor until the chest touches the floor again. Throughout these movements, shoulders, hips, and heels form a straight line. 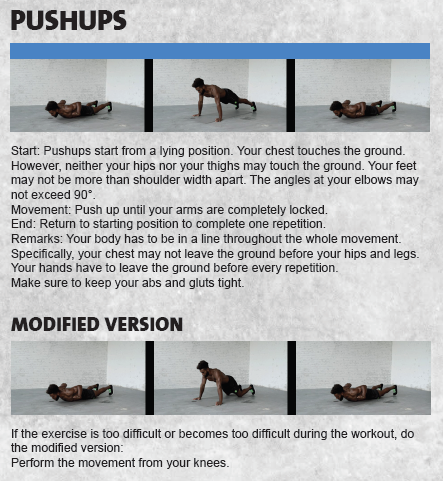 Which muscles are being used during push-ups?

Although the arms carry out the movement, push-ups are essentially a chest exercise. The main force comes from the chest muscles: pectoralis major and pectoralis minor. But also shoulder and arm muscles, especially the deltoids and the triceps, which are responsible for the stretching of the arms. But push-ups can do even more: the trunk musculature, namely the back extensor and the straight abdominal muscle, involved by providing the necessary tension in the body. Also supportive work is done by the gluteal (buttock) and front thigh muscles, as well as by smaller auxiliary muscles in the upper area of the back. 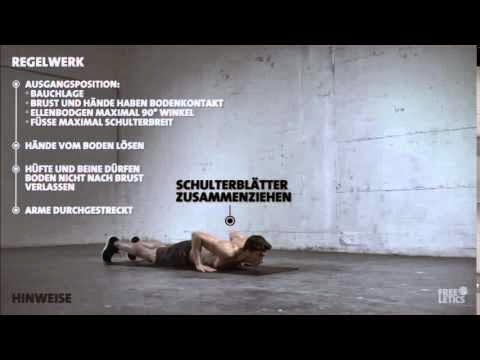 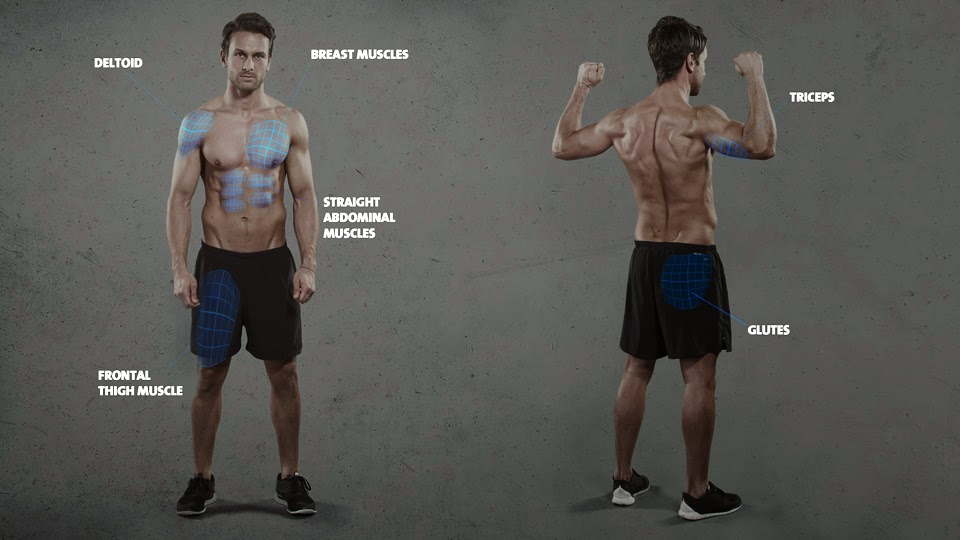 Push-ups are an exercise that require plenty of strength. After all, up to 80% of your own body weight is being pushed upward. During the exercise, a very intense force acts on the muscle fibers which stimulates their growth and strength. The crucial factor here is the force acting on the muscle. Force is the product of mass and acceleration – that is, the mass of your body weight and the speed used to push it up. The faster you press yourself up doing push-ups, the more force your muscles must use and the more intense the training will be. You will have made significant progress by the second workout. Still, clean execution of the exercise with complete body tensing is paramount!

Even those not aiming for simple muscle development can benefit from push-ups. The exercise does not necessarily lead to added body mass, because that still is primarily a question of nutrition. The muscles are simply increasing in resilience and endurance through doing the exercise. First, a more robust muscle is able to complete more repetitions in less time, which is equivalent to higher energy consumption; second, stronger muscles during activity consume disproportionately more energy. A high consumption of energy is the basic prerequisite for the sustainable burning of fat!

Push-ups - finally they have an ending!

To be able to lift your own bodyweight is no mean task and will take some practice. Unlike other exercises like Burpees or Jumping Jacks, where your mind decides when a break is called for, the limiting factor with push-ups is your strength. Muscles exerting great force deplete their energy reserves relatively quickly. You can often watch the body “sagging” because the arms lack the strength to push up the body under tension. Once you have arrived at this point and are no longer able to push up your tensed body, you should pause briefly. Alternatively, you may change to knee push-ups as a less strenuous option That means that your knees touch the floor at all times and that only the weight of your upper body is being moved.

Watch the video tutorial and learn the technique!