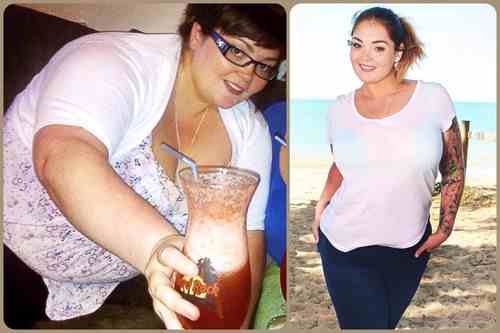 "I am a mother of two beautiful boys, partner to Derek and have lots of beautiful, supportive friends. That said, I've spent the last 14 years of my life over weight. At my biggest official weigh-in I was 169kg. I was tired, depressed and sick all the time.
My solution was to stick my head in the sand. I decided it was easier to live in denial than to face the brutal truth: I WAS KILLING MYSELF!
Suffering from Type 2 Diabetes, my Blood Glucose Levels were regularly over 35mmol/L. I was insulin resistant, had inflammation of the liver, depression, anxiety, fatigue, headaches, extreme swelling, dizziness, panic attacks, vomiting, eczema, cushing syndrome was mentioned more than once (though I never followed through with regular doctor appointments to have it confirmed), as was irritable bowel syndrome.
I had been diagnosed with Bipolar Disorder (a diagnosis that has now been reassessed and removed). The prescribed medication for this escalated all symptoms of the illnesses above.
I was booked in for weight-loss surgery, spent the two weeks leading up to it following the required pre-op diet (funnily enough it was ketogenic) and was then told my liver problems made the surgery too high risk. Looking back now, I am so grateful, but at the time it seemed to be my only hope.
In 2012 I started making small changes in my life and was able to slowly lose 30kg over the next year and a half in what I like to refer to as 'accidentally'. It was discovered my bipolar diagnosis was incorrect, and I was taken off the medication and started counseling.
We moved interstate, and I started to find quiter places I could go with less panic attacks. I was always so self-concious. I started to walk a tiny bit more, I ate a tiny bit less and a smart man named Derek gave me a goal. I got a horse that required physical care every day in a place where there was no one around. I had my 'space' to move my huge body and not feel judged and a reason to do it.
I was still sick but was slowly changing my life for the better and here is where our lives truly changed.
At the end of 2013, Derek began his Low Carb, High Fat journey without my support. High Fat??? I was a bitter, cynical and honestly a scared woman. I did want him to change and be happy, but I was worried about his health (heart attacks, cholesterol...oh yep I harped on at him). I was confused and afraid of the changes I started to see in him, but in awe at the same time.
Three months after watching his journey from the sidelines, seeing how he'd become obsessed with a lifestyle, and was discovering new levels of personal health and happiness I grew curious. He NEVER once suggested I tried it, he NEVER once tried to tell me why my porridge with banana and honey was wrong and he NEVER once snapped back at my cynical and negative comments.
It was the smartest thing he has ever done in our relationship and I believe it saved my life.
One day, after complaining and whining of how tired and hungry I always was, I took it upon myself to show curiosity to him and asked 'eating boiled eggs helps you when your tired and hungry hey?'. He smartly replied with a simple 'yep, it does'. No pressure or jumping on the chance to get me on board.
And so it started at the end of March 2014....my life really began. I ate an egg. One boiled egg started my journey and here I am today with a whole new life of health and happiness!
I am no longer on ANY diabetes medication.
My average Blood Glucose Level is now 4.4mmol/L... 100% from diet change.
No more medications AT ALL for any mental health or physical illness.
This is the happiest, healthiest and most energetic I have ever been. EVER!
I now have the energy and vitality to enjoy life and be the mother and partner my family deserve.
I know it can work for you too!
Telaine xo" forrás